Testogen is one more in a long line of supplements aimed at increasing natural testosterone levels, generally geared towards improved health and fitness in men – and our Testogen review aims to determine whether or not it is a worthwhile weapon to add to your strength gaining arsenal.

The natural element cannot be overstated – this is no exogenous testosterone supplement, no steroidal concoction. Supplements like Testogen are compounds of natural ingredients designed to aid the body’s own natural creation and retention of testosterone, meaning that levels will never be excessive and there will be no unwanted side effects.

Now, saying that a supplement is one more in a long line of similar products may sound pejorative. In this case, it isn’t. There is an overabundance of supplements on the market that promise to increase testosterone levels. Some are snake oil peddled by unscrupulous, shady outfits. Others are the real deal, open and honest about their products’ potential, offering no guarantees, whilst including fantastic quality compounds in their formulae.

Testogen, it turns out, is very much in the latter camp. Theirs is a reputable product that seemingly works wonders for testosterone levels and male health more generally. 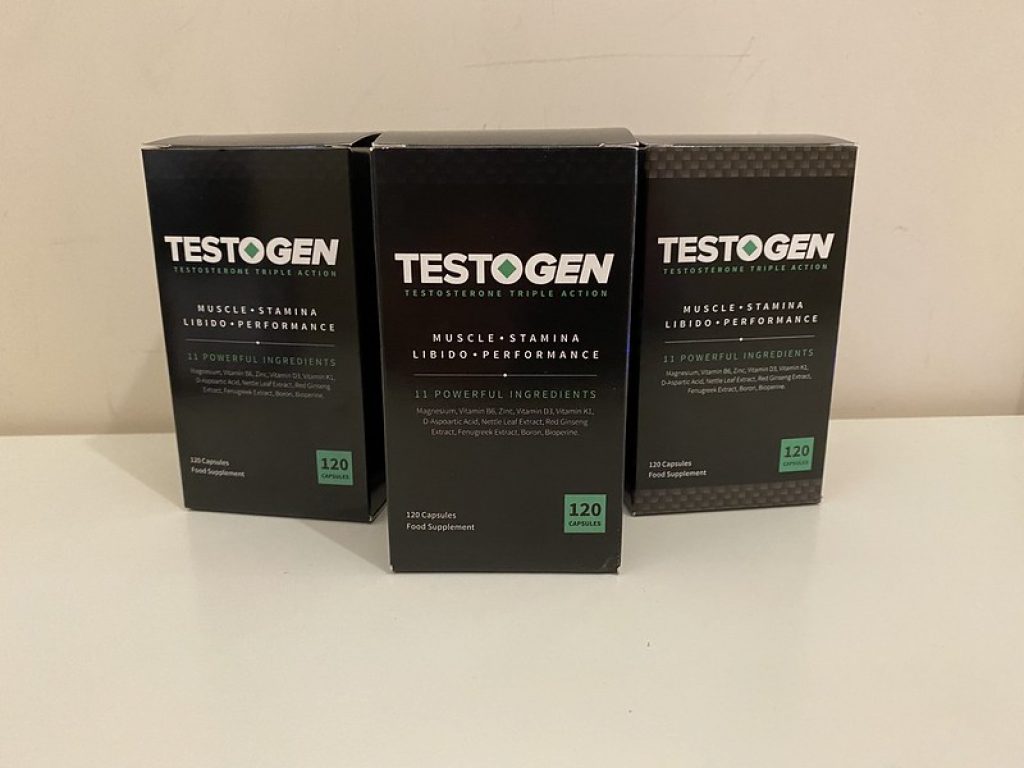 Obviously, the main benefit to taking Testogen is in the increase in testosterone that you will likely experience. This can be more or less profound based on a number of factors – any man’s natural output, with those at the lower end often benefitting more, as well as their pre-existing intake of many of the ingredients included in Testogen’s recipe, their responsiveness to those ingredients, and many things besides.

It may do nothing for you. It will likely do something, however, and can end up being an absolute game changer.

I’ll talk about male health and fitness a lot in this article. However, this is only because the potential benefits are far greater for men than women. Women can and will benefit from higher, normalized levels of testosterone – they can absolutely benefit from taking supplements like Testogen, especially in an athletic context.

After the age of around 25, most people will begin to experience diminishing testosterone levels. Those over 35 stand to benefit the most from products like Testogen. By the age of 50, most men will produce less than half the testosterone that they will have done at the age of 20.

It will improve body composition – the ratio of lean muscle to body fat. Testosterone is key in building muscle, which is one main reason why men on average have greater muscle building potential than women. Muscle is metabolically active, meaning that it burns more calories per pound than other types of body tissue.

Again, this will obviously have great athletic ramifications, as you have more energy in the gym and better recovery through improved sleep.

Finally, men will also often experience higher libidos with larger testosterone, which plays a large part in decreased sexual appetite in most people in later years. Testogen will help to counter this, partly due to generally raised testosterone levels, and partly due to the inclusion of ingredients like Korean Red Ginseng Extract, Zinc, and Fenugreek extract are natural libido stimulators.

So, what actually goes into Testogen – what is it that is supposed to improve testosterone so much? And how does it work?

First up, all of Testogen’s ingredients are completely, 100% natural, and they have all been rigorously researched. This is a big deal in a world full of supplements that either bring about massive side effects, or don’t do anything at all.

The first main ingredient of note is D-aspartic acid (D-AA). Testogen contains more D-AA per serving than any other commercially available product.

Next up, we have fenugreek extract. Fenugreek contains furostanolic saponin compounds, which are thought to inhibit the enzymes that convert testosterone into estrogen, thus allowing for higher overall testosterone levels. Research has linked fenugreek supplementation to improved testosterone levels and decreased symptoms of low testosterone. It has been noted in particular for its ability to improve energy levels, strength, body composition, mood levels and libido.

Testogen also contains zinc, another usual suspect in any good testosterone booster. This is crucial, because even a mild zinc deficit can lead to greatly reduced testosterone levels. It is a fantastic antioxidant, which may protect testosterone producing Leydig cells and allow them to function more optimally.

Most of us don’t get enough zinc in our diets, so it is crucial we supplement.

Testogen uses zinc citrate specifically, which has been proven to be better absorbed than other zinc sources.

Vitamin D levels have also been closely linked to testosterone production. Testosterone levels can be greatly impacted by a lack of vitamin D.

Testogen uses vitamin D3 (cholecalciferol) which has been shown to be the most efficient form for testosterone production.

Vitamin D also generally works better when taken alongside boron, magnesium, and vitamin K. Testogen includes all of these in its formula.

Magnesium, meanwhile, has been shown to increase total and free testosterone levels, especially in athletic, active men. However, despite this link, we also typically under consume magnesium, with older men being at greater risk of deficiency than younger men. Testogen contains 200mg in every serving.

Korean ginseng is one of the heaviest hitters in Testogen’s formula. It’s one of the world’s most popular natural medicinal herbs, with very good reason. In this context, it has been clinically proven to improve testosterone levels. However, it has a secondary use, which is the reason Testogen have included it.

Korean Ginseng is one of the best libido-boosting ingredients in the world, and has been used in this capacity since ancient times. Compounds contained within ginseng, ginsenosides, increase dopamine and acetylcholine levels in the brain – these are neurotransmitters that are linked to desire, arousal and reward. They are also thought to improve nitric oxide production, which will lead to greater blood flow to the penis, giving greatly enhanced erections!

These are just a few of the ingredients – there are more, all of them combined and dosed to allow for optimum testosterone production.

I took Testogen for three months and was incredibly pleased with the results.

Now, I’m not going to talk about my libido or anything related to it here – that’s private, thank you very much. Suffice to say that… well, I was incredibly pleased with the results. 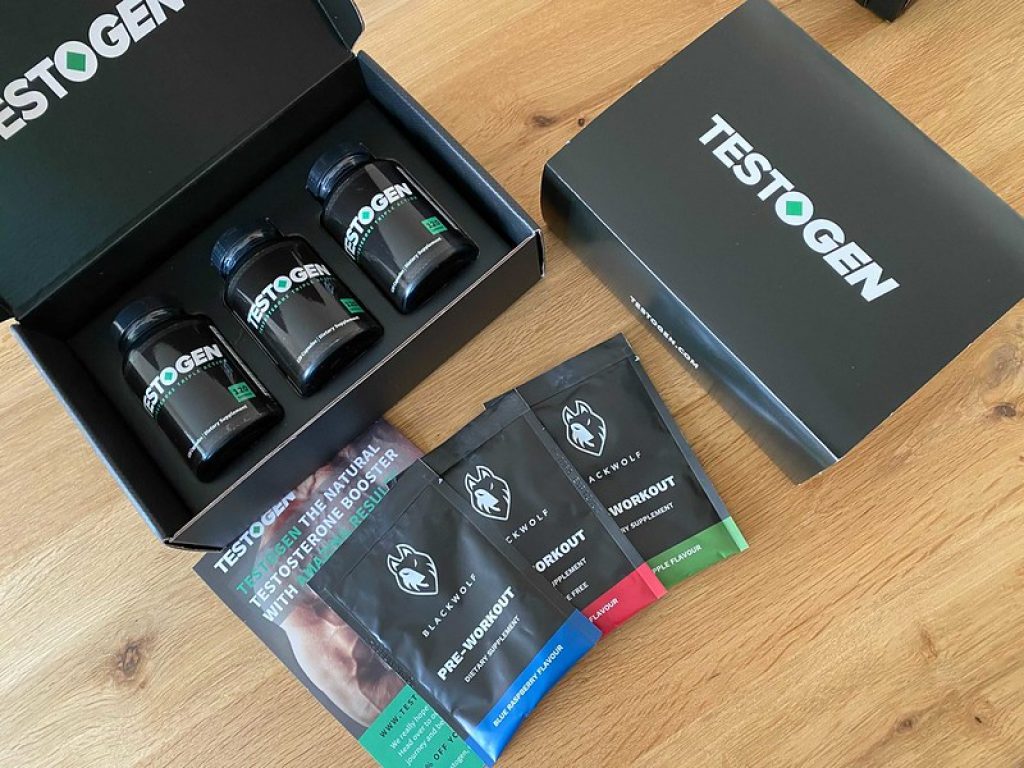 I am, in essence, a very active person.

There are a great many health benefits to being this active. However, it takes its toll. Energy levels can be lacking. Brain fog is a thing, especially after a heavy deadlift session. Recovery is vital to success, yet I always seem to be playing catch up. Sleep is vital yet, after an amped up evening workout, can sometimes be hard to come by.

I also recently turned 30. Whilst I’m far from the danger zone, I don’t recover as quickly as I did ten years ago. I shudder to think what the difference in my testosterone levels are between now and then.

I am a prime candidate, therefore, for a good quality testosterone booster like Testogen.

I felt the difference in energy and focus most immediately. It wasn’t that I had more energy per se – it wasn’t like drinking an espresso or taking a pre-supplement. However, I had a much clearer head. I could think with a great deal more clarity than I could before the Testogen kicked in. My energy levels also stayed pretty consistent, with no afternoon slump, no great fall after the caffeine peaks I generally put myself through, no morning sluggishness.

I began to sort of coast through life like it was a breeze. It was all very refreshing.

My strength also improved. Though this is due to a number of factors – a good program, a clean diet, plenty of carbs before a big lift, and so on – I have to credit the Testogen with some of it. I hit a PR on the deadlift and my upper body fatigued far less quickly when I was working a heavy bag.

My body composition also changed a little. Again, this will be down to several factors. However, my muscles were harder, more solid, than usual, and I found it very easy to cut down fat without losing strength (indeed, I increased my strength over the three months).

I also slept very well. Admittedly, this is probably because I was lifting harder, punching harder, and was generally just able to do more during the day, so I was always pretty shattered come bedtime. However, I generally stayed asleep all night long, where usually I tend to come out of every REM cycle, waking up several times before dawn.

Essentially, as far as I could tell, the Testogen was doing exactly what it was meant to be doing. The results were fantastic – I honestly couldn’t have asked for more.

Why Boosting Testosterone Naturally Is Worthwhile

I would break this down into two questions. Firstly, why boosting testosterone is worthwhile. Secondly, why you should do it naturally.

To answer the first, I would refer you to the benefits I felt on my three-month trial – the exact benefits that athletic men passed their peak are meant to gain. I was stronger, more energetic, less fat, happier, more focused, and I’ll admit, the libido benefits were nice.

Keeping your testosterone naturals naturally high can also safeguard you against a broad range of diseases, as well as muscle wastage, later in life.

I was a better athlete and a healthier man for taking Testogen.

Doing so naturally has a few advantages. Firstly, doing so unnaturally, with exogenous testosterone levels, brings some major health risks. Most importantly, it will have the opposite effect to the intended one over time – your body will likely cease testosterone production altogether, often irrevocably. Many enhanced bodybuilders end up on medication to counter this as they age.

Exogenous testosterone sources are also all either illegal, or at least banned in many athletic competitions. If you are a competitive athlete, you simply cannot run the risk – you will be caught and disqualified at some point. Just ask Lance Armstrong! As illegal supplements, many are also completely unregulated, so that you really don’t know what you’re putting into your body.

Testogen, and products like it, are open, honest, transparent, and well-tested, with few to zero side effects. You have everything to gain and nothing to lose, as the old cliché goes.

In case you hadn’t guessed, I like Testogen. I like it a lot. I’m always skeptical going into any supplement regime, especially with expensive ones that seem to offer too much. If it’s too good to be true, and all of that.

Testogen are very well scientifically backed up, however. They cite peer reviewed, academic studies for all of their claims. In this regard, their website is well worth a look – it’s a treasure trove of proven knowledge.

Plus, it works. I’ve tried it. I’ve benefitted from it. I was a better athlete, as mentioned above. I was stronger, able to train for longer, able to recover faster, with more energy and less achy instances of DOMS (delayed onset of muscular soreness). Combine Testogen with some decent omega 3 and you will rarely feel like you trained the day before, no matter how hard you pushed yourself.

It made me happier, more energetic, more positive, and more focused. All of these benefits are worth any price tag. I would consider Testogen good value for money at twice the price.

Get Social With Us:
Most Recent:

What To Do On Rest Days